Every day your tellers hand out hundreds of marketing opportunities known as drive-up or teller envelopes. Give the same one to every customer, every day, and it is soon ignored.

Copy General prints your envelopes in a sequential series, just like these samples. Your tellers hand out different envelopes as they cycle through the series. Customers will receive varied messages every time they visit. Printed in full color, they are attention-getting and attractive while promoting your products and services. 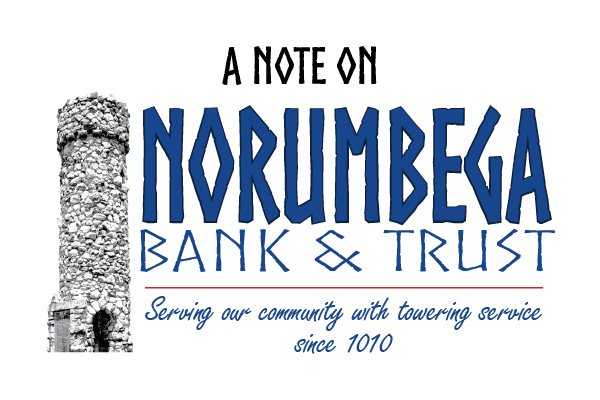 When I was a child growing up in the suburbs of Boston, my favorite place to go was Norumbega Park. It was a small amusement park on the banks of the Charles River. In the Big Band era, it was famous as the home of the Totem Pole Ballroom.

We always thought “Norumbega” was solely an Algonquian tribal term. Just recently I learned that in the mid-19th century, Eben Norton Horsford, a retired Harvard professor, was convinced that Erik the Red had landed in Boston in the early 11th century and had established a settlement in the area. He erected the Norumbega Tower (used in our logo) in 1889 at the supposed location of Fort Norumbega, their redoubt.

In keeping with our theme, our logotype is set in Norse and the text type on the sample envelopes is Trebuchet (a siege weapon that came along in the next century).